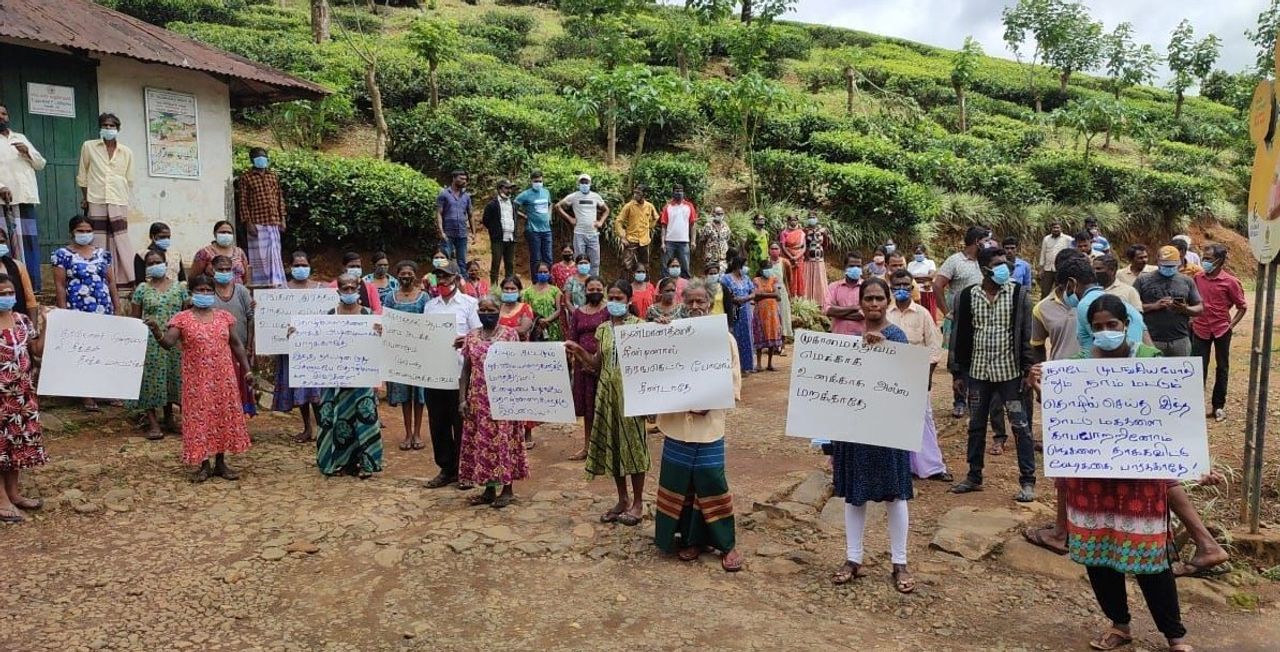 The Plantation Workers Action Committees (PWAC) of the Alton, Glenugie and Abbotsleigh estates are holding a joint online meeting at 3pm on Sunday March 27 to demand the unconditional reinstatement of all sacked estate workers. A total of 54 workers were victimized by management and fired from the Alton, Katukelle and Welioya estates.

The meeting will discuss escalating attacks on workers’ rights, including increased workloads, pay cuts, the so-called revenue-sharing model and other measures to increase productivity. These cost-cutting attacks have the blessing of President Gotabhaya Rajapakse’s government and are fully supported by the unions.

We urge workers and youth in plantations and other sectors to attend Sunday’s meeting and discuss the agenda needed to defeat this repression and defend jobs, wages and conditions.

Plantation workers have long resisted the revenue-sharing system of exploitation, which distributes a plot of land with 1,000 to 1,500 tea trees to individual workers on a contractual basis. Workers and their families are expected to tend the tea bushes, with certain inputs provided by the company, and harvest the harvest. Leave is returned to the company, which deducts its expenses and profit, with the balance returned to the worker as income. Once fully implemented, workers lose their employee provident fund and other hard-won rights.

The revenue-sharing scheme was first imposed in 2016 in the Maha Uva and Walapane estates in Central Province, and in the Tillyrie, Battalgalla and Annfield estates in Dickoya, near Hatton. However, the management of the estate had to abandon or only partially apply the system due to the resistance of the workers.

Plantation companies began implementing revenue sharing in full last year, after suppressing a series of struggles by workers in the areas of Alton in Up-Cot, Katukelle in Talawakelle and Welioya near of Hatton. The Horana Plantation Company (HPC) began imposing the system on its Alton, Fairlawn, Gouraville, Stockholm and Mahanilu estates after a brutal attack on its workers in Alton.

In February 2021, police arrested 24 workers and two youths at the Alton estate on charges of physically assaulting estate managers. The witch hunt was launched after workers went on strike for 47 days to demand higher wages and oppose management harassment. The arrested workers now face trial in criminal court. Using the same bogus charges, HPC then summarily fired 38 workers, who are now struggling to earn an income.

The Ceylon Workers’ Congress (CWC) aided and abetted the company and the police conspiracy with the National Union of Workers (NUW) and the Democratic Workers’ Front (DPF) silently endorsing this crackdown.

Alton Estate’s four divisions entered the revenue-sharing scheme in October. The workers were also told that they had to pick 18 kilograms of tea leaves per day in order to receive a daily wage of 1,000 rupees (about $4). If this target is not achieved, the worker is only paid 40 rupees per kilo, which is much less than 1,000 rupees per day.

As one worker on the Alton estate explained, “I have a piece of land with almost 1,500 tea trees, which has halved my monthly salary. I have to pluck and clean and do other work. Sometimes my husband, who has retired, helps me but it is still very difficult to reach our goal.

Last month, she only received 4,000 rupees. The assigned tea bushes were in two different locations, which meant a waste of time getting to the plots, which made it difficult to complete the daily target. The unions ignored the workers’ complaints.

A Fairlawn estate worker said: ‘Our rights are being taken away by management, following the introduction of the revenue sharing system. The water supply system at our estate has completely collapsed and we have to bear the cost of repairing it.

The Katukelle estate is managed by Maskeliya Plantation Company. When workers began to take action against increased workloads last September, they were the target of a series of attacks from management and police. Eleven workers were fired and now face legal action.

Thondaman is currently Minister of State in the Rajapakse government and other union leaders have held cabinet posts in previous regimes. Plantation union leaders are part of the political establishment and the unions they lead serve the corporations and the government of the day.

Last week, the Planters Association (PA) marked 30 years since the privatization of formerly state-owned estates by demanding the full implementation of the revenue-sharing model. He claimed that 70% of tea production was related to labor costs and needed to be reduced.

PA leaders compared the production of Sri Lankan farm laborers to low cost and high productivity in Kenya and southern India. The new system was necessary, they said, to compete in the global marketplace. They have also repeatedly claimed that they pay higher wages and provide social benefits, including decent housing, to Sri Lankan farmworkers.

These claims are lies. Hundreds of thousands of tea plantation workers and their families live in overcrowded 10 x 12 foot (about 3m x 3.5m) rooms with no basic sanitary facilities. Estate schools and medical dispensaries have almost disappeared.

While several thousand families have received new homes, these are not much different from the old row rooms and were mostly built under foreign aid programs.

Escalating attacks on plantation workers are unleashed amid an unprecedented economic crisis in Sri Lankan capitalism with declining growth, falling currencies and the danger of default on foreign loans. The government responded by raising the price of basic necessities. Unable to afford basic foodstuffs and fuel, the working class and rural masses bear the brunt of this crisis.

Last week, President Rajapakse announced that his government would turn to the International Monetary Fund for financial assistance, which means even tougher austerity measures.

Plantation workers, like their counterparts in other sectors, have come forward in a series of struggles over the past year to defend wages and working conditions. Sunday’s action meeting will discuss the need for a program to fight the following demands:

* The unconditional reinstatement of all dismissed workers.

* No to the revenue sharing system.

* Higher wages, linked to the rising cost of living, and a fully paid leave and pension plan.

* Medical benefits for all workers and high quality medical facilities on each area.

* Decent and livable houses for all.

To fight for these demands, workers must create their own action committees independent of the unions and their leaders.

We say that workers can only realize the above demands and win their basic rights in the struggle for the nationalization of the big plantation companies under the democratic control of the working class. This must be part of a broader struggle for socialist policies and in unity with workers across Sri Lanka and internationally.