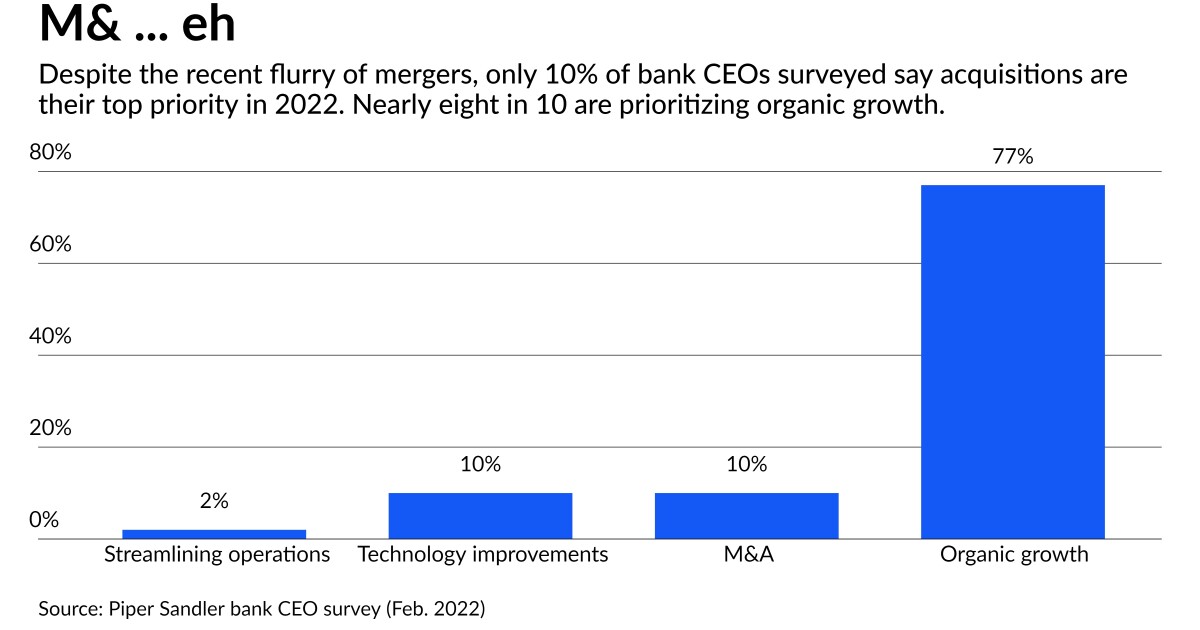 Banking CEOs are thinking less about mergers and more about organic growth as they anticipate a rebound in lending this year, according to a new survey.

Of 49 bank chief executives surveyed by Piper Sandler in February, 77% said organic growth was their top priority, compared to just 10% who were more focused on mergers and acquisitions.

The latter finding is surprising, given many bankers’ past interest in mergers, said Mark Fitzgibbon, head of financial services research at Piper Sandler, who conducted the survey.

The recent wave of mergers and acquisitions has been fueled by bankers seeking to partner to reduce costs, achieve greater scale and pool resources as technology spending becomes more important.

But today’s volatile markets, which cause bank stock prices to fluctuate, “make it difficult to price transactions,” Fitzgibbon said. He also noted that a slower pace deal approvals in Washington, DC, may dampen the appetite for mergers and acquisitions.

Market swings have been frequent this year, with investors worrying about decades-high levels of inflation, impending Federal Reserve interest rate hikes and Russia’s invasion of Ukraine. which has pushed oil prices to their highest levels in years.

So, at least in February, bank CEOs focused on securing much of the expected rebound in loan growth. The hope in the industry is that 2022 will mark a turning point after high customer cash balances – and uncertainty about the business climate – dampened loan demand for much of the pandemic.

Piper Sandler analysts expect loans to grow 6.8% on average this year, which is in line with survey results. More than two-thirds of bank CEOs surveyed said they expected loan growth of 4% to 7%, and almost a quarter saw loans growing even faster.

These results may be “a bit biased upwards” because the survey weighed the opinions of CEOs of smaller banks more heavily, Fitzgibbon said, noting that larger institutions likely have more modest projections. He also said rising oil prices will put “somewhat of a drag” on loan growth expectations.

While the geopolitical news led to some uncertainty, customer views on the economy largely remained “rather positive”, he said.

Meanwhile, Regions Financial continues to be “pleased with our ability to deliver” loan growth this year, given the continued demand for credit, CEO John Turner told the conference. Still, he said the conflict in Ukraine and rising oil prices have made some customers a little less confident than they were a few weeks ago.

In the Piper Sandler survey, 27% of bank CEOs cited cybersecurity as their top concern for the industry, a surprising finding given that bankers “don’t talk about it much,” Fitzgibbon said.

The survey was sent a few days before Russia invaded Ukraine, but there was already talk at the time of the need to guard against potential cyberattackswhich was maybe “fresh in people’s heads,” Fitzgibbon said.

“These companies need to spend more on cybersecurity than we realize” and redirect savings from cost-cutting initiatives toward strengthening their cyberprotections, he said.

Twenty percent of respondents said they were most concerned about inflation driving up bank spending, while other CEOs were about evenly split between concerns about a flatter yield curve, fintech competitors and the deterioration in credit quality.

Transcript: Kristalina Georgieva, Managing Director of the IMF, on "Face the Nation", March 13, 2022

Why Warren Buffett Considers His Home His Third Best Investment