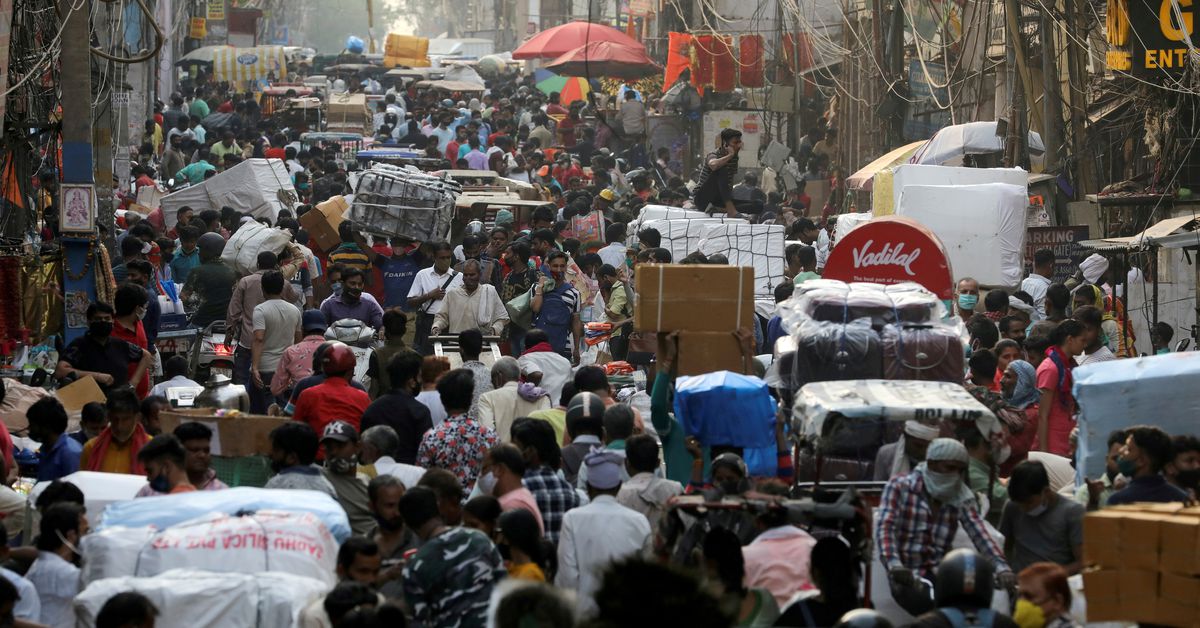 BENGALURU, Oct 5 (Reuters) – India’s economic recovery from pandemic-related shutdowns is at risk of a further delay in the six months that are left of this fiscal year, according to economists in a Reuters poll, who expect elevated inflation to hold or accelerate, not fall.

Price pressures in the world’s second most populous country have soared thanks to rising fuel prices, but the Reserve Bank of India is not expected to raise interest rates until at least the beginning of next financial year, in April-June 2022.

With lingering concerns about risks to growth, that leaves the RBI slightly behind many of its emerging market peers that are already raising rates.

“While extremely accommodative monetary policy has prevented the economy from falling off a cliff, a continuation of this policy in the absence of appropriate fiscal support will barely move the needle in terms of the pace of recovery of lost growth potential,” said Kunal Kundu at Societe Generale.

That follows a 20.1% expansion in the April-June quarter, the highest since the mid-1990s, which was helped by a very low base – the start of the pandemic in the prior year.

Those forecasts are largely unmoved from a July poll.

Asked about the greater risk to those numbers for the remainder of the fiscal year, 23 of 34, or over two-thirds of respondents, said a delayed recovery with limited downside. Eight said a strong recovery followed by an upgrade, and the remaining three said weak and prone to further downgrades.

“But with inflation expected to remain elevated … persisting with ultra-accommodative monetary policy when the economy is in a recovery phase could lead to stagflation, impacting the recovery itself,” said Kundu.

Inflation was forecast to be well above RBI’s medium-term target of 4% but was projected to remain below the 6% upper threshold until at least end-2024, according to the poll.

The RBI has been vocal about its intention in helping the government bolster growth and said policy support from all sides is required to nurture a nascent and hesitant recovery.

“It will be a long while yet before financial conditions start to tighten in earnest, and even longer before policy rates are raised. Rate hikes will come onto the agenda when the economy should be closer to health,” said Shilan Shah at Capital Economics.

“The big picture is that policy will remain very accommodative for several months yet.”

Even as those uncertainties about the pace of the recovery prevail, the Indian stock market appears to be unfazed as share prices repeatedly reach record highs.

Investors have flocked to Indian shares as businesses and mobility recuperated from the devastating second wave of COVID-19 during April-May more quickly than expected.

The jobless situation has also improved with major restrictions lifted. A further 17 of 27 respondents said there was a low or very low risk unemployment will rise over the coming year. The rest said there was a high risk.

(For other stories from the Reuters global economic poll: )