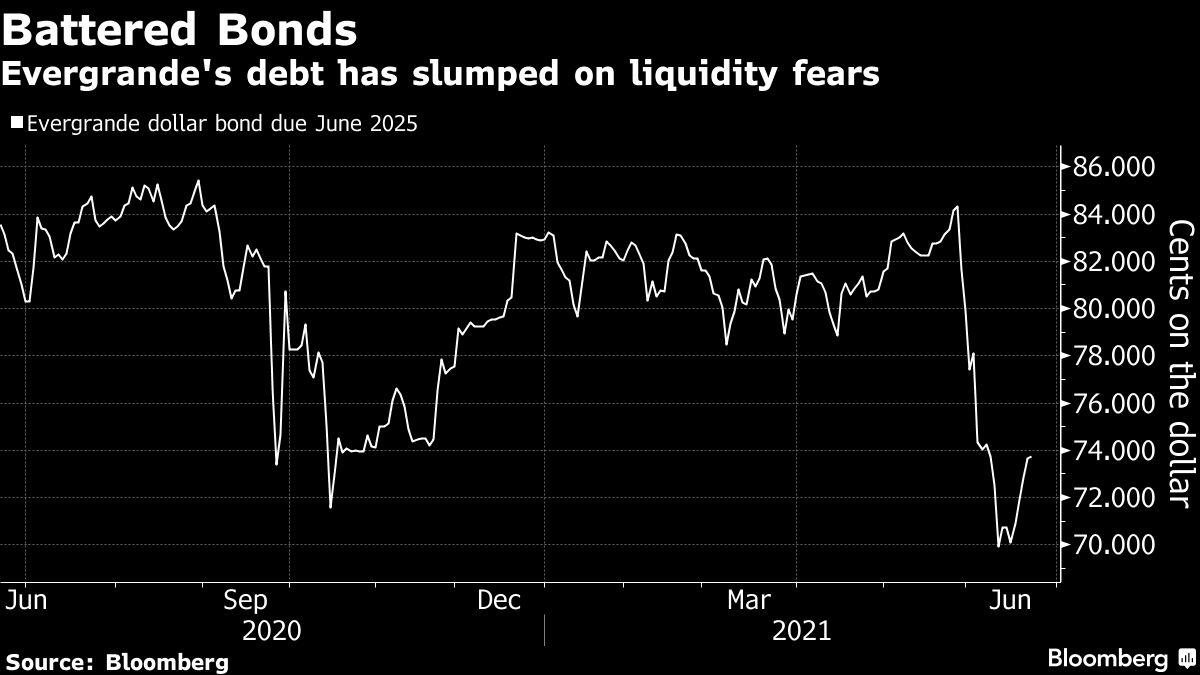 
(Bloomberg) — Several large Chinese banks are restricting credit to China Evergrande Group amid mounting concerns about the developer’s financial health, according to people familiar with the matter.

Three banks with a combined 46 billion yuan ($7.1 billion) of credit exposure to Evergrande as of June 2020 have decided in recent months not to renew loans to the company when they mature this year, the people said, asking not to be identified discussing private information. The decisions were made before Evergrande’s bonds began tumbling at the end of May and resulted from banks’ internal risk assessments, the people said.

Three other banks are allowing Evergrande to roll over portions of credit lines it has already tapped but are limiting the company’s access to any untapped credit from those lines, the people said. These banks decided against a more restrictive stance partly due to concern that a large reduction in lending to the world’s most indebted developer could destabilize China’s financial system before the politically sensitive 100th anniversary of the Communist Party on July 1, the people said.

Some Chinese trust firms — the second-biggest lenders to Evergrande after banks — have also been reassessing their exposure to the company, people familiar with the matter said. One firm no longer considers guarantees from the group as sufficient for lending to its subsidiaries, focusing instead on the quality of collateral backing the loans. Another is reviewing whether to issue new products tied to Evergrande. Both firms are among the 10 largest providers of trust loans to the developer.

While the moves don’t by themselves suggest Evergrande is at risk of an imminent liquidity crisis, they do show the company faces dwindling options as it looks for ways to repay debt.

Evergrande remains heavily reliant on bank funding even after some lenders took preliminary steps to reduce their exposure in the second half of last year. Bank loans and other borrowings from firms including trusts accounted for about 81% of the developer’s 335.5 billion yuan of interest-bearing debt coming due in 2021, according to its latest annual report.

In a response to questions from Bloomberg on Monday, Evergrande denied that banks were curbing its access to funding and said its business relationships with all banks and financial institutions were normal, without elaborating.

Billionaire Hui Ka Yan’s property giant unveiled plans in March to roughly halve its debt over the next two years and has also pledged to meet at least one of China’s regulatory borrowing limits for developers, known as the “three red lines,” by the end of this month. The company has been ramping up home sales — sometimes at significant discounts — and offloading other assets to free up cash.

On Monday, Evergrande said it would sell shares in a Hangzhou unit to a company controlled by Wang Zhongming, a repeated investor in Hui’s operations. It’s the billionaire’s latest move to tap financial support from deep-pocketed friends, who have repeatedly stepped up with cash infusions during times of stress. Evergrande’s stock jumped 9% on the news, rebounding from a four-year low and delivering a hit to short sellers who had piled into bearish bets in recent weeks.

The company’s shares and bonds had tumbled since the end of May after missed payments at Evergrande affiliates and a report that regulators are probing the developer’s ties to Shengjing Bank Co., a lender in which it owns a stake. Evergrande has said that it will arrange payment for overdue commercial paper at its affiliates and that its dealings with Shengjing Bank are compliant with Chinese law.

Junk-rated bonds issued by Evergrande that mature in June 2025 fell 0.5 cent on the dollar to about 73 cents on Tuesday, data compiled by Bloomberg show. The stock declined 1.5% at 11:06 a.m. in Hong Kong.

By declining to roll over loans to Evergrande, some banks are taking an even more cautious approach than required under the “three red lines” framework. While Evergrande is prohibited from taking on additional debt after becoming one of just four major real estate companies to breach all three red lines at the end of last year, the developer can roll over existing loans if banks agree to do so.

Trust firms, which invest money from wealthy Chinese savers, have already significantly reduced their exposure to Evergrande, according to data compiled by Use Trust. The developer has raised just 9.3 billion yuan from trust issuance so far this year, down 85% from the first six months of 2020. Such financing accounted for 41% of the company’s total borrowing at the end of 2019.

Evergrande has long been a source of angst for Chinese regulators and creditors. In 2018, the central bank singled out the developer along with HNA Group, Tomorrow Holding Co. and Fosun International Ltd. as businesses that might pose systemic risks to the nation’s financial system. Chinese regulators recently instructed major creditors of Evergrande to conduct a fresh round of stress tests on their exposure to the company, people familiar with the matter said earlier this month.

Evergrande’s complex web of liabilities — including bank loans, bonds and down payments from homebuyers — swelled to 1.95 trillion yuan at the end of last year, about 77% of which was due within 12 months, according to its annual report.

With more than $20 billion of offshore bonds, Evergrande stands alongside China Huarong Asset Management Co. as one of the most prolific Chinese issuers of dollar debt. Like Huarong, it’s considered a litmus test of the government’s willingness support embattled borrowers as policy makers try to balance sometimes competing goals of maintaining financial stability and reducing moral hazard.

Subscribe now to stay ahead with the most trusted business news source.