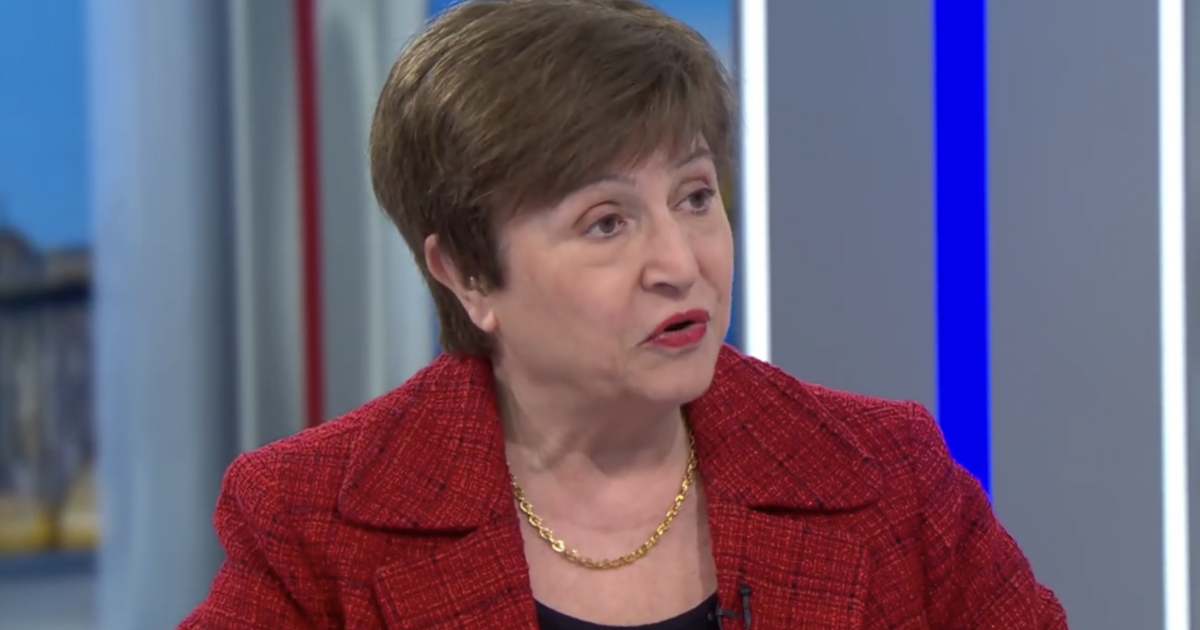 The following is a transcript of an interview with Kristalina Georgieva, Managing Director of the International Monetary Fund, which aired Sunday, March 13, 2022 on “Face the Nation”.

MARGARET BRENNAN: Last week, severe financial sanctions and trade restrictions were put in place to punish Russia and cripple its economy. Among them is a ban on all Russian imports of oil, gas and coal, as well as products like vodka and caviar. We now welcome the Managing Director of the IMF, Kristalina Georgieva. Welcome to FACE THE NATION.

IMF CHIEF EXECUTIVE KRISTALINA GEORGIEVA: Thank you very much for inviting me.

MARGARET BRENNAN: I wonder how you can calculate the total impact of all these restrictions imposed on Russia. I mean, will Russia default on its debts and what impact will that have on the global economy?

KRISTALINA GEORGIEVA: Let’s remember that the reason these are unprecedented sanctions is that the unthinkable happened, a devastating war in Ukraine. And the impact of the sanctions is quite severe for the Russian economy. We expect a deep recession in Russia, and this sharp contraction is already affecting how the Russian population experiences it. The ruble depreciated considerably. What does it mean? Real incomes have declined. The purchasing power of the Russian population has decreased considerably. In terms of debt service, I can say that we no longer view the Russian default as an unlikely event. Russia has the money to service its debt, but does not have access to it. What worries me the most is that there are consequences that go beyond Ukraine and Russia.

MARGARET BRENNAN: It’s true. I mean, you said the crisis in Ukraine could cause famine in Africa, for example, you look at wheat imports and the price spikes there. Which countries in the world are you most concerned about? Will this destabilize other governments?

KRISTALINA GEORGIEVA: What concerns us the most are the immediate neighbors of Russia and Ukraine, the Central Asian republics, the Caucasus, Moldova, because they have trade relations with Russia and Ukraine more than with the rest of the world, and because of this influx of people wave of refugees in Europe, which is of the order of magnitude of what happened during the Second World War. This is where the impact is greatest. Beyond the immediate neighbours, there are two groups of countries that are of great concern to us. The first group includes countries that have not yet recovered from the COVID-induced economic crisis. For them, this shock is particularly painful. And the second group of countries are those that are more dependent on energy imports from Russia, because there the impact on consumption, but also on inflation, will be greater.

MARGARET BRENNAN: Because of the debt levels you’re talking about, the vulnerability, are we looking at the possibility of this becoming a financial crisis for the rest of the world?

KRISTALINA GEORGIEVA: So far, no. When you look at the banks’ total exposure to Russia, it’s about one hundred and twenty billion dollars. Not negligent, but certainly not systemically relevant. And what we’re also seeing is that while we’re inevitably going to lower our growth projections for 2022, it’s still going to be a positive growth rate. For countries that have recovered quickly from the COVID crisis, such as the United States, growth is robust. It is those who were falling behind where the impact is most severe. And let me say this, yes, the war in Ukraine means hunger in Africa, but the war in Ukraine also has social implications for many, many countries through all three channels which are already having a clear impact. First, the prices of raw materials, energy, grains, fertilizers, metals to the impact that this has on inflation and in countries where inflation has already been high, it is dramatic.. .

KRISTALINA GEORGIEVA: Like the United States, like many emerging countries, think of Brazil, Mexico and three, what do we do when we have to fight inflation? We are tightening financial conditions.

MARGARET BRENNAN: I have a question for you. You worked on emergency funding for Ukraine. If this government falls, will Russia be able to seize this money? If Russia installs a puppet government in Ukraine, will it be able to access this money?

KRISTALINA GEORGIEVA: We think our internal interactions with Ukraine are very productive. We have provided $1.4 billion in emergency financing to Ukraine’s special account with the IMF. In other words, it is droned by the Ukrainian government and no one else can touch it. And we see that the Ukrainian authorities have been remarkable. Margaret, we have had negotiations on this 1.4 billion and my staff tell me that they can hear the air raid sirens and yet the work continues. I have family in Ukraine. They tell me they can always withdraw money from home. It is even in the city of Kharkiv which is the second largest heavily bombed city. So kudos to the Ukrainian authorities for what they are doing.

MARGARET BRENNAN: Director, thank you for your time this morning.