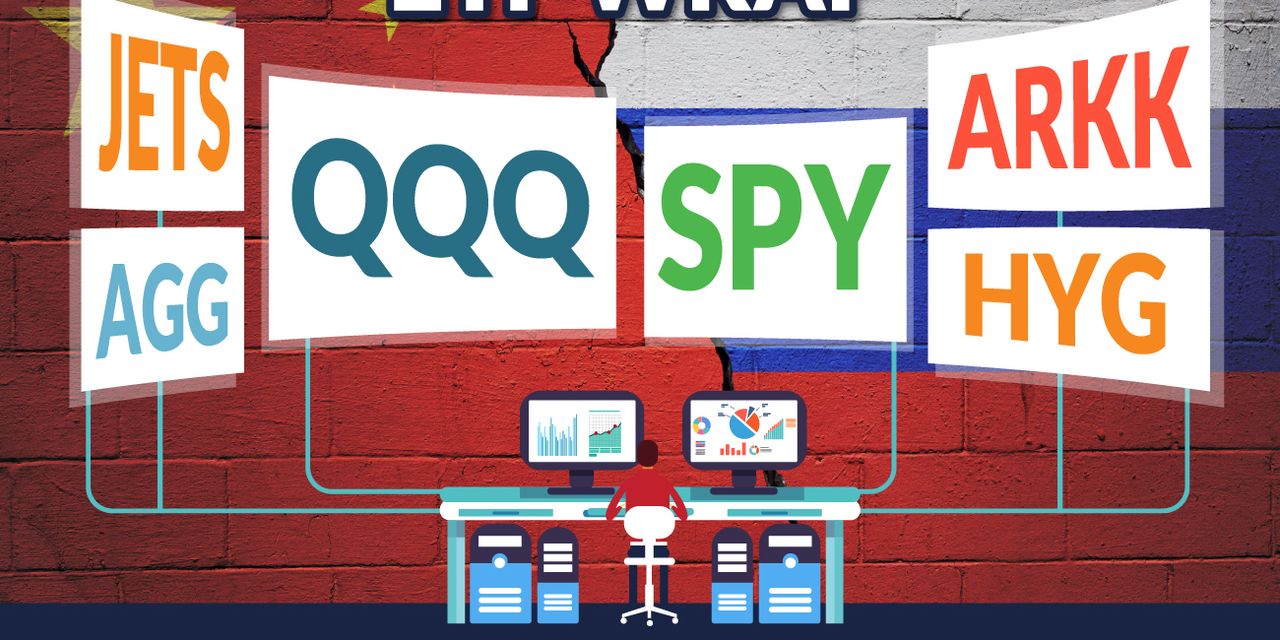 Happy Thursday! Investors have been focused on the recession signal sent by the U.S. bond market this week as the Federal Reserve aims to fight high inflation through interest rate hikes this year.

For this week’s ETF Wrap, we spoke with Harley Bassman, managing partner at Simplify Asset Management, and Vanguard Group’s John Madziyire, who is a senior portfolio manager and head of U.S. Treasuries and inflation within the firm’s fixed-income group, about the debt markets and where investors might consider putting money to work against the backdrop of rising rates.

We also take a look at last week’s high-yield ETF outflows, and why they made Jefferies equity strategist Steven DeSanctis “a little nervous.”

The $3.2 billion of withdrawals from high-yield ETFs last week are a “big concern,” according to a Jefferies research report dated March 26. The outflows, including from the iShares iBoxx $ High Yield Corporate Bond ETF
HYG,

and SPDR Bloomberg High Yield Bond ETF
JNK,
,
amounted to 13.2% of the category’s asset base, the report shows.

“It makes me a little nervous,” said Steven DeSanctis, equity strategist at Jefferies, in a phone interview. While high-yield ETFs have seen “pretty significant” outflows this year, “this one was notably chunky,” he said, adding that the bulk of the withdrawals were from iShares iBoxx $ High Yield Corporate Bond ETF
HYG,
.

DeSanctis said he worries that selling pressure in the high-yield market could lead to wider credit spreads, which he monitors as a gauge of investors’ risk appetite.

High-yield spreads can tell investors “whether or not there’s trust in the credit market,” and soured sentiment in the junk bond market can spill over into the equity market, said DeSanctis. When companies borrow in the bond market, they pay a spread over comparable Treasuries, with riskier, junk-rated businesses facing higher borrowing costs.

The $3.2 billion of outflows from high-yield bonds ETFs in the week through March 25 didn’t lead to wider spreads, though, according to DeSanctis. “It’s a little peculiar because spreads actually narrowed over the course of the week, thankfully,” he said, adding that the tightening of spreads came as market volatility subsided last week.

But high-yield bond spreads have widened a bit since the start of 2022. They were 3.33 percentage points over comparable Treasurys on March 30, compared with 3.05 percentage points on Jan. 3, according to ICE BofA US High Yield Index Option-Adjusted Spread data tracked on the website of the Federal Reserve Bank of St. Louis.

During economic downturns in particular, investors watch for signs of stress in the high-yield market because companies with high levels of debt relative to their cash flows are more vulnerable, said DeSanctis. Meanwhile, the U.S. economy is “very strong,” and can handle tighter monetary policy, said Federal Reserve Chair Jerome Powell during his March 16 press conference. But growth is expected to slow against the backdrop of high inflation that the Fed aims to fight through rate hikes.

Also see: Goldman cuts U.S. GDP forecast as it says recession odds are as high as 35%

The U.S. Treasury market this week flashed a recession warning, with 2-year yields briefly exceeding 10-year yields in a so-called inversion of that portion of the yield curve for the first time since 2019.

“The Treasury market is flashing a very bright yellow light about caution about the economy,” said Harley Bassman, managing partner at Simplify Asset Management, in a phone interview. “You have not seen that caution flow through to the corporate bond market or to the equity market—yet,” he said.

The S&P 500 index recently exited correction territory and is trading not far off its all-time high. The S&P 500
SPX,

was trading down modestly Thursday afternoon, according to FactSet data, at last check.

See: What stock-market investors need to know about the bond market’s recession signal

were down about 0.1% Thursday afternoon and have fallen around 5% this year, FactSet data show, at last check. Shares of the SPDR Bloomberg High Yield Bond ETF
JNK,

were similarly down this afternoon and so far in 2022.

With the Fed kicking off its rate-hike cycle this month, investors have been concerned that rising interest rates will hurt the value of their bond holdings.

The latest research paper from FlexShares ETFs, managed by Northern Trust, says that “bonds with shorter durations are often less sensitive to rising interest rates” but tend to have lower yields. That’s why some investors might consider taking additional risk in high-yield debt, according to FlexShares, whose research shows “historically the high-yield segment of the fixed-income markets has performed well during periods of rising interest rates.”

Investors worried about rising rates hurting their portfolios might also want to consider the Simplify Interest Rate Hedge ETF
PFIX,
,
according to Bassman. Shares of the ETF have risen about 33% so far this year, FactSet data show.

John Madziyire, a senior portfolio manager and head of U.S. Treasuries and inflation within Vanguard Group’s fixed income group, said by phone that “short duration products” are “the best place” for investors as interest rates rise. When yields go up, “you actually don’t want too much duration risk,” Madziyire said. Investors seem aware of this, as Vanguard is seeing an uptick in inflows into shorter duration funds such as the Ultra-Short Bond ETF
VUSB,
,
he said.

As for the best and worst performing ETFs this past week, two funds at Cathie Wood’s ARK Investment Management ranked among the top five. But last week’s top performer, United States Oil Fund LP, fell to the bottom, according to FactSet data through Wednesday.

In ETF launches this week, Columbia Threadneedle Investments said Wednesday that it is offering the Columbia Seligman Semiconductor and Technology ETF (SEMI), an actively managed fund that will primarily invest in “securities of semiconductor, semiconductor equipment and related technology companies.”

“We’re excited to bring back the VIX futures exposure that investors have been missing since 2018,” said Stuart Barton, co-founder of Volatility Shares, in the announcement.

Check out: A bet on stock-market volatility might saddle investors with hundreds of millions in losses, as Barclays makes a big change to funds